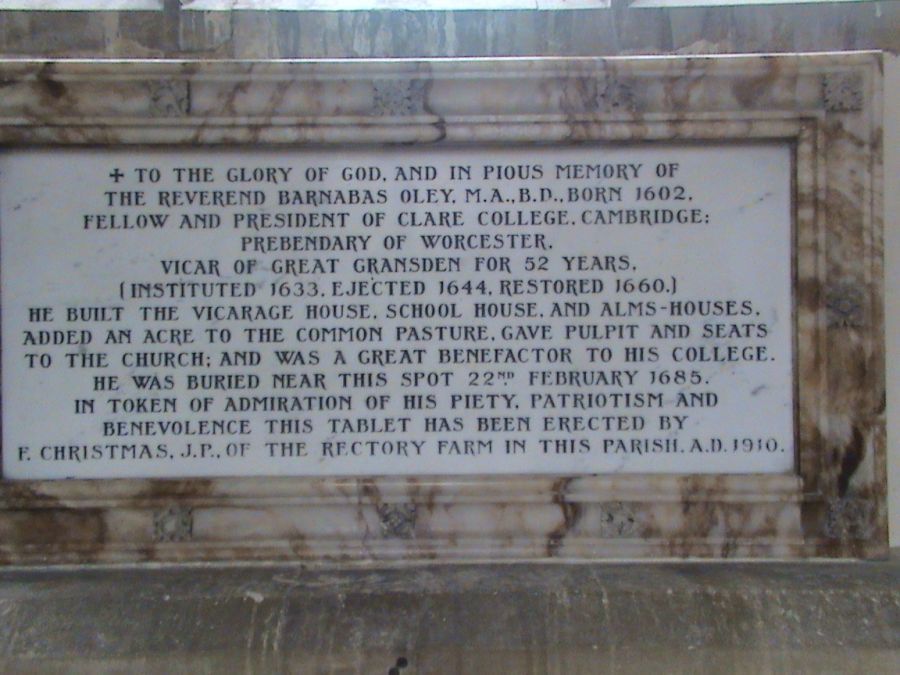 Barnabas Oley was a Vicar of Great Gransden, a fellow of Clare College and a generous local benefactor. He founded our school in 1664.

Barnabas was born in 1602, in the village of Wakefield in the West Riding of Yorkshire, where his father was the Vicar.  He attended the Grammar School in Wakefield and then went to Clare Hall at the University of Cambridge. Later he worked as a tutor at the University, became a Senior Fellow and in 1633 was made Vicar of Great Gransden.

England was not a happy place at this time; there was trouble between Parliament and King Charles I. The argument was leading to Civil War and people had to decide which side to support.  Barnabas was a Royalist; he decided to collect money for the King at the University.

Later, he set out on a dangerous journey to take the money and silver plate that had been collected to the King in Nottingham.  He was successful, but the Earl of Manchester, who was the Major General of the Parliamentary forces in the area found out that Barnabas was a Royalist supporter and had him thrown out of his living.

Barnabas spent the next 7 years wandering about the North of England, often in disguise and in fear for his life. He preached to Royalist soldiers in Wakefield and Pontefract, but life was not at all easy for him.  Then he heard that Charles II had been crowned king, so he headed back to Cambridge in 1659. Five years later he moved to Gransden and he lived here for the rest of his life.  The people welcomed him back and he was able to do many things to help the village. He improved the church, including having a fine new pulpit fitted. He built a large vicarage and six Almshouses. Then in 1664 he founded the school, which was situated in a brick building at the bottom of Middle Street.

Barnabas was also responsible for developing the accommodation at Clare College and is remembered with affection there. He died on 20th February 1685 and was laid to rest in the chancel of the church, although his grave was not marked, there is a commemorative plaque - see photo below.

Back to Our History

We use necessary cookies to make our site work. We'd also like to set optional analytics cookies to help us improve it. We won't set optional cookies unless you enable them. Using this tool will set a cookie on your device to remember your preferences.

Necessary cookies enable core functionality such as security, network management, and accessibility. You may disable these by changing your browser settings, but this may affect how the website functions.